Covered in this week’s Green Mobility Policy Briefing: the European Parliament sign off on proposals to increase the uptake of sustainable aviation fuels; a Europe-wide drone project is underway to test the safe integration of drones into urban airspaces; the International Council on Clean Transportation say the EU is in a strong position to attain its 2°C climate pathway; and China’s Ministry of Commerce announce plans to stimulate car demand.

European Parliament gives the green light to increase the uptake of sustainable aviation fuels (SAF). The European Parliament voted on Thursday to adopt most of the Transport Committee’s proposals to increase the uptake of SAF within the EU as part of the ReFuelEU Aviation initiative, which itself is part of the EU’s ‘Fit for 55’ package of measures. Specifically, MEPs elected to increase the minimum share of SAF made available at EU airports. Starting at 2%, the SAF share will increase to 37% by 2040, and 85% by 2050. Moreover, MEPs amended the definition of SAF as to include biofuels produced from animal fats. However, Parliament excluded feed and food-crop based fuels, including those derived from soy or palm sources. The decision to ban the use of biofuel feedstocks has been applauded by environmental groups, with Matteo Mirolo, aviation policy officer at Transport and Environment, a clean transport NGO, stating that “sustainable aviation fuels should have no link whatsoever to deforestation, loss of biodiversity and increasing food prices. Today, EU lawmakers have gone a good way towards a definition of SAFs that is positive for our planet and the credibility of aviation’s green future”. Both Airlines and the wider energy industry are supportive of the decision, with Airlines for Europe (A4E) noting that “passengers can now trust that the ramp up of sustainable fuels in the coming years will not occur at the expense of food supplies for people or animals, nor damage our environment.” – By Thomas Hayden-Lefebvre

Europe-wide drone project underway to test the safe integration of drones into urban airspaces. The project, which is being run by AMU-LED, a consortium of European public and private sector organisations, commenced with a demonstration day held at Cranfield University, UK, last week. Using large electric vertical take-off and landing (eVTOL) aircraft, AMU-LED aim to demonstrate that passenger-carrying drones can be safely integrated into urban regions, and in doing so accelerate the potential for increasingly sustainable smart cities. This point was relayed by Gokhan Inalhan, Professor of Autonomous Systems and Artificial Intelligence at Cranfield University, who suggests that the project “will pave the way for highways in the skies, removing traffic and congestion and changing the way that we move around”. The event included presentations and the opportunity to see data from a live drone test flight integrated into the automated air traffic control system, U-space. The flight demonstrations represent the next step in determining the readiness of the technology for implementation, by “putting into practise scenarios, concepts and systems developed throughout the project to test how drones can operate safely in the same airspace”, says Inalhan. AMU-LED will undertake further tests regarding the feasibility and interoperability of drone operations within the U-space ecosystem throughout the summer, with trial events taking place in five further locations across the Netherlands and Spain. The project is a beneficiary of funding from the SESAR Joint Undertaking under the EU’s Horizon Europe research and innovation programme, which with a budget of €95.5 billion, helps to achieve the UN’s Sustainable Development Goals whilst simultaneously accelerating the EU’s competitiveness and growth. – By Sam Phelps

Related: No, the European Parliament did not vote to ban combustion-engine cars.

The current pace of electric vehicle (EV) sales in Europe places the EU in a strong position to attain its 2°C climate pathway, says the ICCT. Following the bloc’s adoption of CO2 emissions-reducing policies, EV production and adoption has increased rapidly over recent years. From 2019 to 2021, the market share of EVs in the EU increased by 8 percentage points per year, with EV sales representing 20% of total vehicle sales for the first time in Q1 of 2022. By maintaining this pace of transition, the International Council on Clean Transportation (ICCT) predicts that the EU will exceed a 90% EV sales share by 2030 and achieve full electrification by 2032. The realisation of such targets will place the bloc firmly on track to meet its 2°C climate target, consistent with the Paris Agreement. Indeed, the European Parliament’s recent decision to ban the sale of new combustion engine cars by 2035, and the expectation of imminent policy action in major markets, provides further optimism for the continuation of this trend. However, maintaining progress in EV uptake within the bloc will remain strongly dependent on cooperation between governments, automakers, and other important stakeholders. This represents an increasingly acute challenge, as demonstrated by recent calls for a support mechanism to ease the transition to zero-emission vehicles reverberating from seven EU auto-producing regions. – By Agne Vaitkeviciute 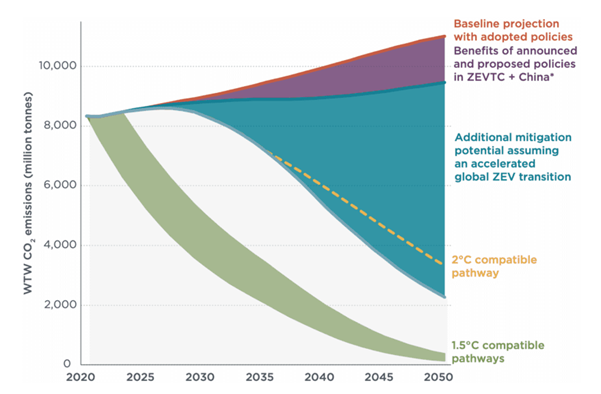 China’s Ministry of Commerce and 16 other government departments announce plans to stimulate car demand. The announcement came following a briefing held by the State Council Information Office on Thursday, in which the Ministry said it would consider extending a tax break for EVs and outlined plans to improve charging infrastructure. Chinese EV sales have rebounded in recent months following the authorities’ decision in May to halve the auto purchase tax to 5% for cars priced under 300,000 yuan ($45,000) in response to the country’s COVID-induced economic slowdown. As the world’s largest car market, policies to stimulate car demand represent a key avenue of growth for the Chinese economy. Passenger car sales were up 22% in June from a year earlier, largely thanks to 7.1 billion yuan ($1.06 billion) in savings for buyers in the first month of the tax cut, whilst EV sales soared 130% over the past month. EV market leader, BYD Co. Ltd. more than tripled their sales to 134,000. Cui Shudong, secretary of the China Passenger Car Association labelled the car purchase tax cut policy as a “silver bullet for stimulating consumption”, suggesting that it can “bring additional sales of about 2 million cars”. As such, it looks increasingly likely that government plans to reinstate the auto purchase tax at the end of the year will be discontinued. The news will be welcomed by EV buyers, who have been exempt from paying the purchase tax since 2014, contributing to strong growth in the Chinese EV market. Sheng Qiuping, China’s vice commerce minister claims that the “measures are targeted and practical” and will remove the “institutional obstacles that have long restricted the development of automobile sales”. – By Sam Phelps