Covered in this week’s Green Mobility Policy Briefing: the UK’s aviation carbon market comes under scrutiny; the UK Department for Transport announce a £1 billion investment in digital signalling technology on the East Coast Main Line rail route; the Dutch government announce their intention to limit flights to and from Schiphol airport; European Parliament’s Transport Committee vote to expand the definition of green jet fuel; and Norway and the EU strike a deal for closer cooperation on battery development. 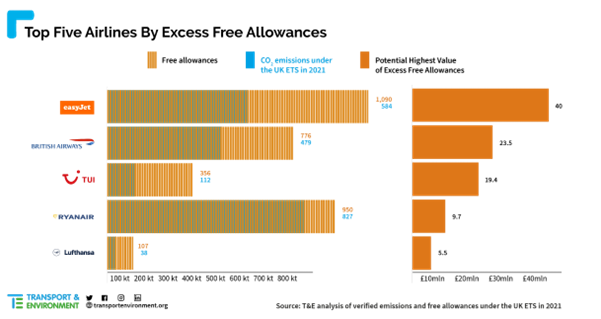 UK Government gives airlines free licence to pollute. The Brussels-based environmental NGO Transport and Environment (T&E) has alleged that the “UK government is giving airlines so many free pollution permits through the carbon market for aviation that they don’t have to pay for any of their climate-warming emissions.” Specifically, a T&E report states that airlines were awarded 4.4 million free carbon credits, significantly more than the 3.4 million that airlines had to surrender under the UK’s Emissions Trading Scheme. Because of the disparity between free carbon credits and those used, airlines have been able to sell their excess allowances to the tune of up to £72 million, according to T&E. Matt Finch, UK director at T&E, said: “The government put in place a scheme meant to reduce aviation emissions, yet it grants get out of jail free cards. Last year was doubly absurd: airlines were allowed to pollute for free, and on top of that the Government awarded excess free allowances that the airlines could sell.” In February 2022, the Department of Business, Energy, and Industrial Strategy (BEIS) commissioned a report which highlighted a potential trade-off between emissions and abatement and competitiveness of the UK’s aviation sector. The report found that free allowances can be used to increase airline revenue, and noted that this misallocation could produce competitive distortions both within the aviation industry and broader transport markets. – By Thomas Hayden-Lefebvre

No, the European Parliament did not vote to ban combustion-engine cars.

UK Department for Transport announces £1 billion investment into digital signalling technology on the East Coast Main Line rail route. Included in its commitment to modernising the nation’s rail network, the UK government plan to replace outdated signalling infrastructure across the southern section of one of the UK’s busiest rail routes with the European Train Control System (ETCS). With one-third of the UK’s population living within twenty minutes of a station on the line, the technology, which will be rolled out through the East Coast Digital Programme (ECDP), will diminish delays and “provide more regular services for millions of passengers”, says Transport Secretary Grant Shapps. In addition to creating a more reliable and efficient transport network for passengers, the ECDP is expected to deliver economic and environmental gains by creating 5,000 additional jobs and decreasing the carbon emissions of the network by 55,000 tonnes. Indeed, with the transport sector estimated to have been responsible for approximately 24% of greenhouse gas emissions in 2020, the commitment to modernising UK rail infrastructure is certainly a step in the right direction. Incentivising passenger uptake of trains is a key component of the UK’s commitment to achieving net-zero carbon emissions by 2050. The ECDP follows more than £350 million of prior investment to fit other services on the route with the new technology, with over 80% of passenger rolling stock on the East Coast Mainline South already using the ETCS. – By Agne Vaitkeviciute

Dutch Government to limit Schiphol flights for environmental reasons. The Dutch Minister of Infrastructure and Water Management, Mark Harbers, has informed the House of Representatives that the Cabinet intends on limiting the maximum number of aircraft movements to and from Schiphol Airport from 500,000 to 440,000 per year. The 12 percent reduction in annual aircraft movements aims to address noise and other environmental pollution concerns, whilst maintaining the Netherlands’ international connectivity. Although the move has been lauded by many environmental groups, the plan has infuriated the aviation industry. In a statement, KLM, the country’s largest airline, has said that the measures will “have dramatic consequences for KLM and for the accessibility of the Netherlands, and will not achieve the desired benefits for our climate and quality of life”. The airline further urged the government to “to take measures that will effectively improve sustainability such as supporting the production of sustainable aviation fuel (SAF) and the realisation of a Single European Sky that would reduce CO2 emissions by 10%.” Similarly, the IATA’s Director General, Willie Walsh called the decision “crazy”, criticising the timing of the move, noting that “after two years of restrictions, the world is getting moving again. Schiphol has been struggling to cope with demand, which shows how important the airport is, not just to Dutch travellers, but as a strategic hub for the Netherlands.” – By Thomas Hayden-Lefebvre

Lawmakers in the European Parliament’s Transport Committee voted to expand the definition of green jet fuel. The EU’s Transport Committee has long advocated an increased sustainable fuel (SAF) blend in the aviation fuel mix, targeting an 85% SAF blend by 2050. Thus, lawmakers voted to expand the narrow list of feedstocks included in the Renewable Energy Directive, in a move to enable producers to meet the increased SAF targets. Under the Commission’s ‘ReFuelEU Aviation’ initiative, SAFs are limited to electro-fuels and biofuels produced from EU-approved feedstocks, all of which are notoriously difficult to scale up. However, the amended text proposes that biofuels produced from animal fats or distillates should be eligible as SAF until 2024, whilst also suggesting the use of recyclable carbon fuels. Claudia Monteiro de Aguiar, a conservative lawmaker who has long pushed for alignment between Europe’s definition and the ICAO’s global standards, praised the move, saying the boost to “innovation, production and deployment of sustainable fuels” would ease affordability concerns. Despite general support from MEPs, the Greens refused to back the text. Irish MEP Ciarán Cuffe claimed the move “would see all kinds of unsustainable feedstocks burnt in plane engines, at a time of heightened food insecurity”. Cuffe also questioned the environmental benefits of higher SAF targets considering the diluted SAF definition, saying that “no caps [on feedstocks] means those same targets can be met with the cheapest and least sustainable fuel sources alone”. Following the amended text’s success in the Transport Committee, it will now go forward to be voted on at a European Parliament plenary session in July. – By Sam Phelps

Hawaii: Resistant to Change or Powerless To Reduce Hydrocarbon-Dependence?

Norway and the EU agree closer cooperation on battery production. On Monday, the European Commission’s Vice-President for Interinstitutional Relations, Maros Sefcovic, announced that the EU and Norway would further their cooperation on battery value chains and raw material supply. In a joint statement, Sefcovic and Norwegian Interior Minister Jan Christian Vestre suggest that through greater cooperation, both the European Union and Norway would “secure supplies of sustainable energy, materials and technologies instrumental for decarbonisation”. Due to the acceleration in electric vehicle (EV) uptake, global demand for batteries is set to increase 14 fold by 2030, with the EU accounting for 17% of that demand. Thus, with Norway’s industrial diversification away from oil and gas production, and towards capitalising on its access to the raw materials critical to battery manufacture, greater cooperation can ease Europe’s transition towards electric mobility. Following the agreement, Norway will participate in the ministerial meetings of the European Battery Alliance, whilst contributing to the European Battery Academy. Norway will also cooperate with the EU to further battery development, by advancing best practices for resource classification, whilst supporting research and innovation through the organisation of a joint Tracing Net-Zero Battery Minerals event. The two parties also agreed to discuss the application of a rules-of-origin clause stemming from the Brexit agreement, which stipulates that EVs produced and exported in either Britain or the EU from 2027 must contain batteries produced in either or face a 10% customs tax. Exempting the fledgling Norwegian battery industry would further accelerate the exploration of business opportunities in battery development or raw material projects in Norway and the EU. – By Sam Phelps